Founded in 1836, Augusta Township received its name from Judson Durkee who petitioned the government to split a potion of land from Ypsilanti Township. Durkee was part of a similar petition in 1829 to begin a mail route from Detroit to Tecumseh.  The original name for the township was Augusta Center, after Mr. Durkee’s former home in Augusta, New York. Early Augusta residents numbered around 559 and had a number of livestock including cattle, hogs, sheep and horses.

The first post office was established around 1832 at Paint Creek, otherwise known by the native Indians as Wejinigan-sibi. The mail stage, which passed between Monroe and Ypsilanti, delivered packets at odd intervals to the first postmaster David Hardy. Mr. Hardy carried the mail in his hat, and upon crossing paths with the various individuals in the community, he would hand them their mail.  Later, when John Schaffer became postmaster, the mail was delivered to his home, where he kept his office. When Frank Whittaker built a store, the post office was established therein. The building also housed a hotel and a dance hall on the second floor.  Residents began calling the settlement at Willis road and Paint Creek Whittaker Corners. 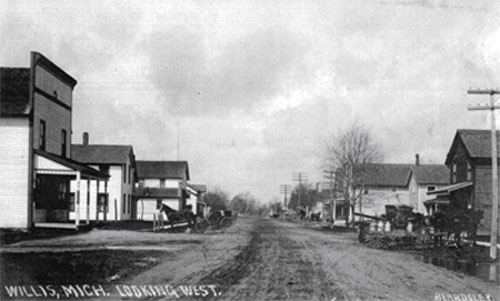 In 1880 surveyors came to the area to select land for a railroad, which would stretch from Detroit to St. Louis. The railroad, completed in 1881, by passed the existing Whittaker Corners area. Willis Potter, a local farmer, owning land east of Whittaker Corners, and adjacent to the new rail road, donated land, additionally, Augusta residents donated $1500 to pay for the materials, and the new train station was built. The town, and post office, moved east from Paint Creek to the area around the station. The post office was named Newcomb, Mary Potter’s maiden name. Residents, however, referred to the village as Willis, official’s felt this sounded too much like the town of Willitts and changed it to Pottersville.  Later, when it was discovered there was another town of that name, they changed it back and the town was officially named Willis in 1889.

The Willis Creamery was a thriving business in its day, taking in as much as 50,000 pounds of milk and 4,000 pounds of cottage cheese a day. The local implement company, as equally successful, sold as many as 119 binders in a single year. 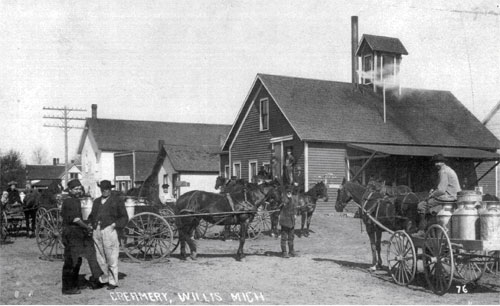 Instead of moving his store east to Willis, Frank Whittaker built a new store further south, again locating adjacent to the new railroad tracks. He built a small shed there to receive his packages, and soon a station was built, other homes were erected nearby.  The village was called Augusta Center because it was located in the center of the township. The township hall was built in 1867. There was a hotel, several stores, four blacksmith shops and a creamery. Packages shipped by train to the store were labeled F. Whittaker. Trainmen started calling the stop Whittaker. 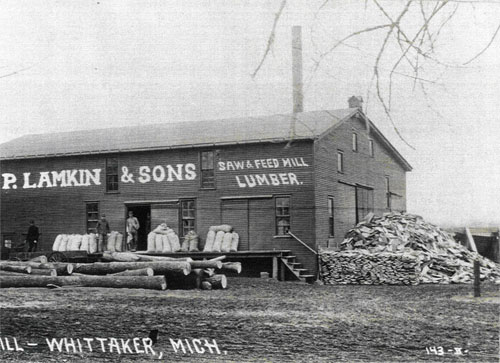 In 1887 P.T. Lambkin built a factory to manufacture broom handles, he later added a sawmill. Charcoal kilns were built and poor lumber and stumps pulled from farm fields were burned into charcoal and shipped to Detroit to be used in the blacksmith forges. Four churches and a doctor’s office were added to the bustling village. Whittaker, in its heyday, was a delightful busy spot. 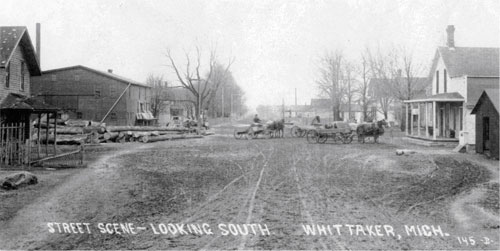